The frog is an animal or biotic factor that I saw during my time at Blakeburn Lagoon.  It also interacts with all the 4 spheres. It interacts with the Geosphere by giving the frog shelter. A frog’s shelter is usually down at the bottom of any body of water. Mostly just ponds or lakes, but there might be the odd frog in the ocean. The Biosphere is connected to frogs by providing it with food.  The flies are a good amount of protein for frogs. So are mosquitos, moths and dragonflies. If a frog is bigger than the one I got a picture of then it may eat small snakes, mice, baby turtles, other smaller frogs, worms and grasshoppers. They interact with the hydrosphere by swimming in the water. Water is also where frogs get their shelter form. So, the hydrosphere actually has many purposes for frogs.  And last of all, frogs interact with the atmosphere by breathing oxygen. Without oxygen, the frog would die, just like any of us. But, as frogs spend most of their time under water, they must be able to hold their breath for long periods of time. The average frog can hold its breath for 4-7 hours!!! How they are able to hold their breath for this long is, they use their skin to absorb the oxygen.

Lifetime of a Tree

This is a decomposer. This slug helps to break down all organic materials, like dead animals. They are also at the bottom of the food chain.  This slug stores its energy by cellular respiration. These mushrooms are also an example of a decomposer. They release a substance called enzymes to help them break down dead plants and animals, however, mushrooms are not capable of photosynthesis, due to being a part of the fungi family. This means that mushrooms are not a part of the producers category.

The frog and crow you see in this are both good examples of consumers.  The frog eats mosquitoes, flies, moths, and dragonflies, which means the frog is a carnivore.  while the crow eat almost anything. Crows will eat anything that is an animal or plant, and that is called an omnivore. If frogs and crows did not eat, then they would not have enough energy, however they both need more than just food to survive. They both also need water, shelter, air/oxygen, and warmth.

This tree and bush are both producers, meaning they both use carbon dioxide, water, and the sun’s energy to create carbohydrates. Plants also produce oxygen for us to breath. They process for creating the carbohydrates and oxygen is called photosynthesis.

If a number of a species declines, to the point of close to or actual extinction, then that would drastically effect the food web, and food pyramid. If the consumers rate declines, the producer rate will go up, as no consumers will be eating the producers, and they will no longer be maintained.  Take Yellowstone park for example. When the wolves died out, the special trees died out to, because the deer were over grazing.

At the lagoon, we saw some ducks, and they were hunting in the water for fish. This is an example of Predation. The ducks eating fish also means that the cute ducks are actually predators, and the fish are the prey.  Ducks eat fish, snails, fish eggs, worms, slugs, and mollusks, which are all considered the prey.

To make sure the frogs do not overpopulate the lagoon, and even though it saddens me, that means killing the frogs eggs. That is one of the ways we can help increase the sustainability of Blakeburn Lagoon. Another way is to not litter on the trails and in the water. Trash all around the lagoon would kill off the animals at the lagoon, and the whole purpose of the lagoon is to bring back all the animals to the area.  The last reason to help preserve the lagoon is to stay on the path and not pick any of the plants around the lagoon. We have to remember that the plants around te lagoon are still living, and picking them would be killing them. The plants that are at the lagoon are meant to be looked at. Just remember, take only photos and leave nothing but footprints. 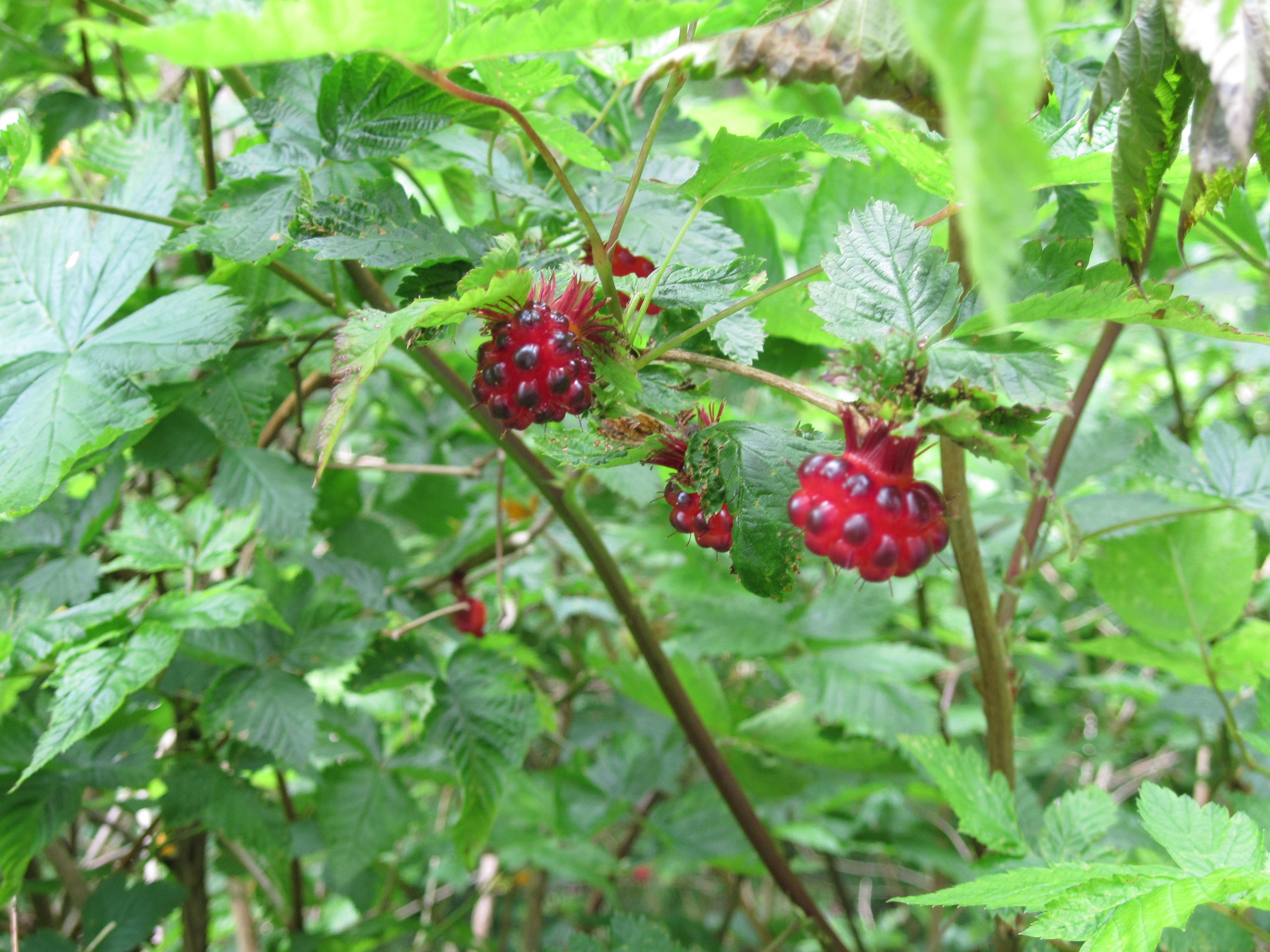 An indigenous plant to Poco is the Salmon Berry bush. Salmon berry bushes have existed about  23.7 to 36.6 million years ago, based on the genes in them and other plants. Salmon Berry bushes were probably useful for many reasons. The berries are not poisonous for one, so they can be eaten, and possibly used for medicine. They berries could have been eaten fresh, or dried and kept for winter. First Nations also peel and eat the young shoots, either steamed or raw. Another way the First Nations could have used the salmon berries would be for paint. If they mash the berries then they could use that as paint or dye for many purposes.

When the lagoon was first made there was a lot more grass. The grass would brag that is would get all the space around the trail and lagoon. When this was found out, a few seeds were planted these seeds turned out to be clovers. The clovers grew into large fields of clovers, overtaking huge parts of the grass. The clovers outnumbered the grass, 5-1. This was the grass’ punishment for being so rude to all the other organisms.